Ezra Morse and Josiah Fisher were granted permission to use 14 acres of the Purgatory Swamp in 1697 and were the first known settlers to live in what is now Norwood. Morse’s grist mill in Dedham had been causing problems for farmers downstream who needed the water for growing crops, but the mill was useful and needed as well. The solution was to move the mill to the Southern part of town.  The mill was located roughly in the area near present day Morse Street, between pleasant and Washington. It was likely close to the rear of the Norwood Space Center and the Certainteed plant on Water St near the East Walpole line.

Ezra Morse built the first house in Norwood in 1678, a typical saltbox style dwelling for the time, on the nearby hill which became known as Morse Hill. In 1868, 4 years before Norwood became a town, his descendant George H. Morse tore Ezra’s house down and built a new house on the same property in roughly the same location. The George H. Morse House still stands at 1285 Washington St, overlooking South Norwood.

The population of South Dedham grew and by 1717, the settlers were tired of traveling into Dedham Village to attend services at the Church of Christ so they petitioned to start their own Parish in South Dedham. The removal of so many parishioners would be a large tax loss for the Church, and Dedham steadfastly refused several times. To solve the problem, parishioners started holding services in private homes in South Dedham 1722.  Dedham agreed to the request in 1728 and on October 18, 1730 the General Court incorporated the area as the South Parish of Dedham.

West Dedham (now Westwood) could not agree with South Dedham as to the location of a new meetinghouse, so West Dedham returned to the Dedham Christ Church.  In 1736 South Dedham erected their first meetinghouse near the present day Morrill Memorial Library. Chosen as the pastorate of the new Congregational Church was Reverend Thomas Balch of Salem, a Harvard graduate. The town records state “he was deservedly highly esteemed for he was a man of talents and intellectual attainments. He was orthodox and highly regarded as a preacher.” The Balch school in South Norwood is named in his memory.

The first Balch Schoolhouse, built in 1867, was named in honor of Rev Thomas Balch. Photo courtesy of the Norwood Historical Society

Two year later, in 1738, South Dedham requested their own schoolhouse and in 1740 built the first school near the site of the present day Callahan school. The school was far from perfect. Teachers had to travel from Dedham each day, sessions were short and only boys were allowed at school, but it was a start. In 1754 South Dedham hired their first schoolmaster and 4 years later girls were allowed to attend the school. This school was closed in 1788.

Now with it’s own meetinghouse and it’s own school, South Dedham continued to grow, establishing the Old Parish Cemetery in 1741. This served as South Dedham’s only burial ground until 1880 when Highland Cemetery was created.

South Dedham had no commercial center, so residents still had to travel the 5 miles into Dedham village for dry goods, materials or other supplies. They also continued to pay taxes to Dedham even though they were now establishing their own services and not benefiting from improvements in the village. Resentment was building.

Two events in 1870 and 1871 finally led to the break between Dedham and South Dedham.

South Dedham had replaced the original schoolhouse with two more. Schoolhouse Number 6 was located near present Lenox and Cross street. Schoolhouse Number 7, also known as the “Little Red Brick Schoolhouse”, stood on the corner of Pleasant and Sumner streets until 2009 when it was moved and meticulously rebuilt on the grounds of the George H Morse house. But South Dedham still didn’t have a High School. In 1870, Frank O. Winslow (of the Winslow Brothers tannery) petitioned Dedham to allow a High School to be built in South Dedham. When the vote failed to pass, talk of secession from Dedham began.

Norwood also had two fire companies- Washington Number 7 near present day St Catherine’s Hall and America Number 10 near present day Walnut Ave and Washington St. Very low tech operations, their tools were mainly tubs of water with bucket brigades and later hand pumps carried via a horse carriage. More than just an emergency service, the firehouses served as social halls, and the men were a proud band of brothers. Washington Number 7 had a tradition of ringing the firehouse bell on the Fourth of July to celebrate the holiday. Dedham Selectmen voted to ban the bell ringing in 1871, and fire Company steward George E. Metcalf defiantly rang the bell anyway.

For many South Dedham residents, these two events were enough to convince them to break away from Dedham. On December 22, 1871 a meeting was called in Village Hall and a committee was selected to petition the formation of a new town, made up of South Dedham and small portion of Walpole. Eighty percent of the village signed the petition.

On February 10th, 1872, the following Bill was presented to the State Senate (you can click here for a PDF or scroll below)

The Bill was approved by the General Court and signed by Massachusetts Governor William B. Washburn on February 23, 1872, 148 years ago today. 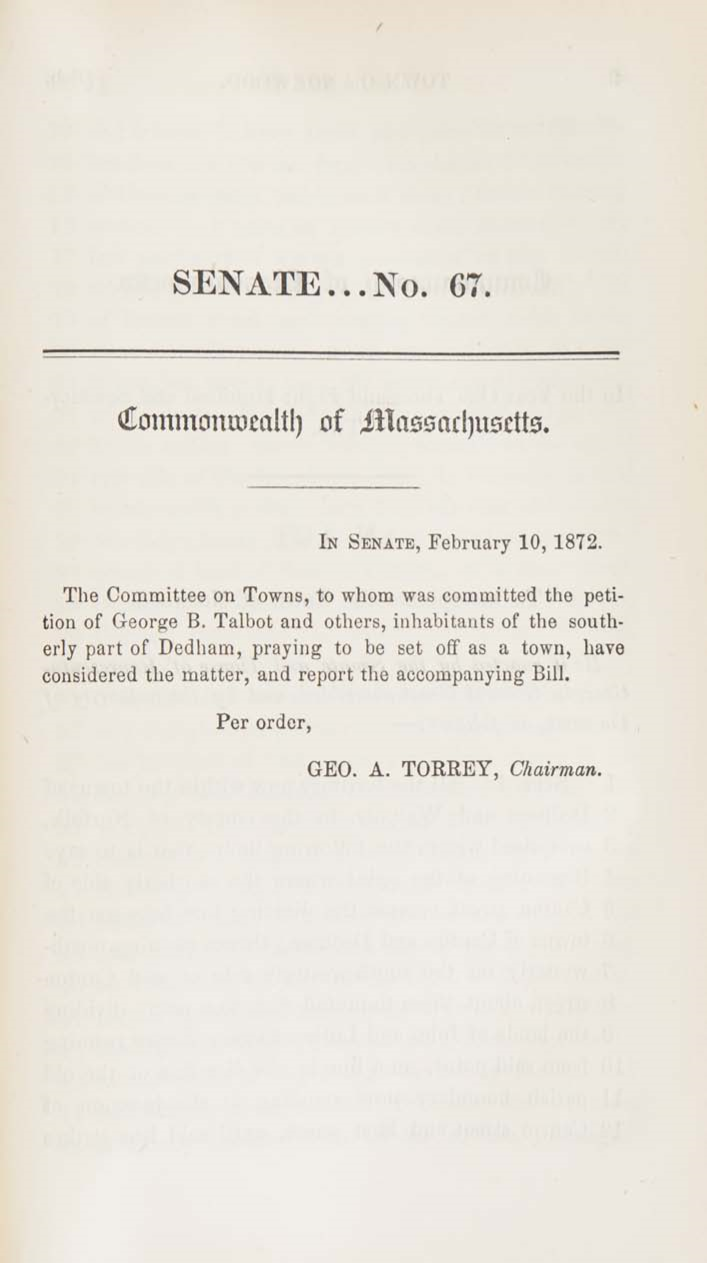 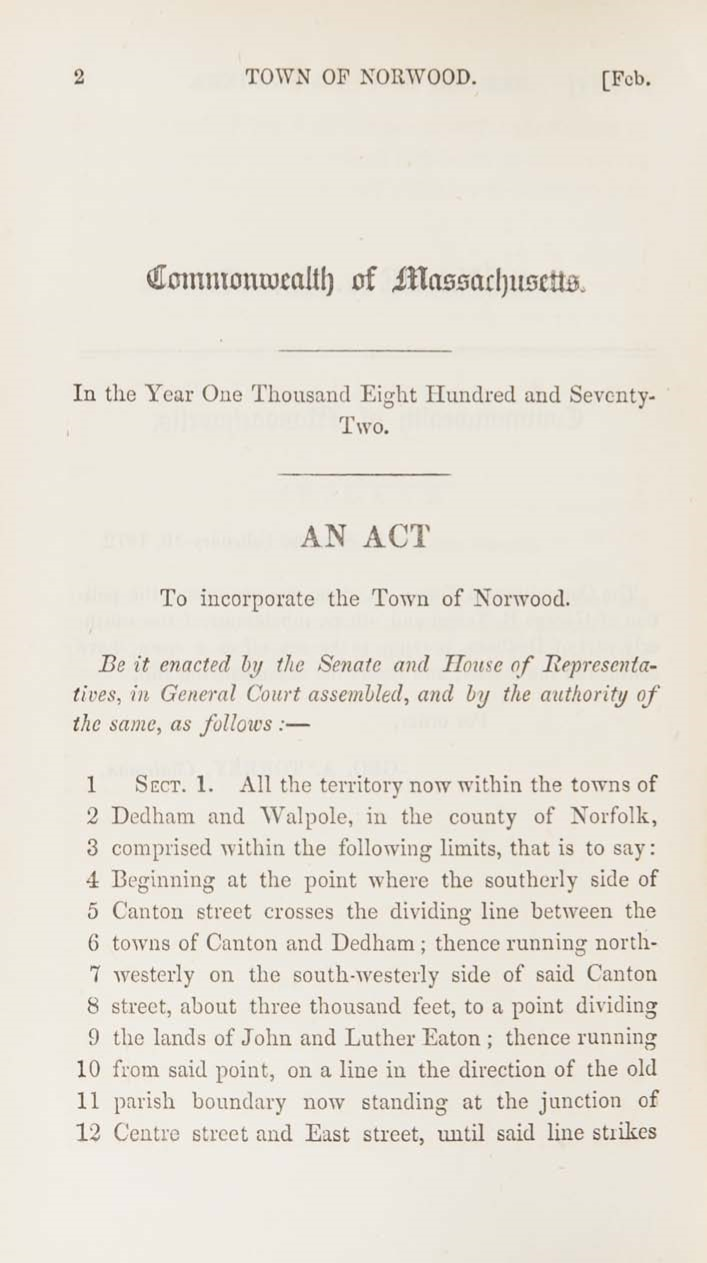 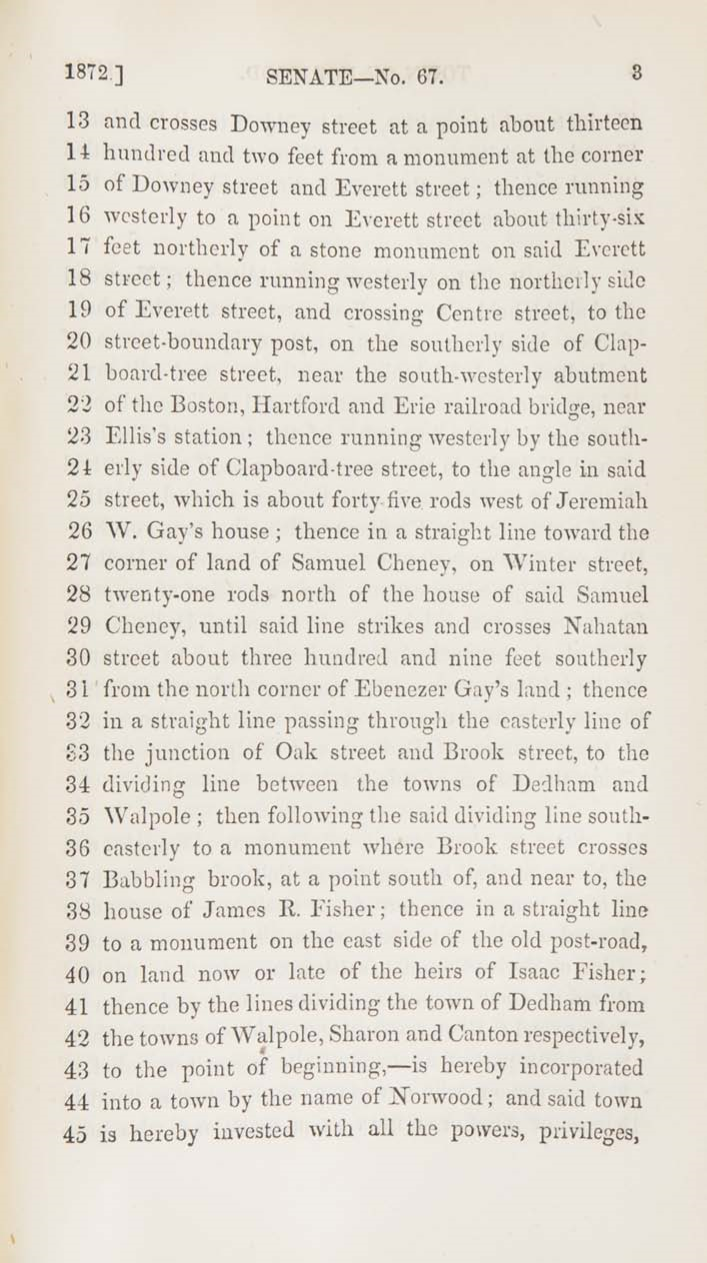 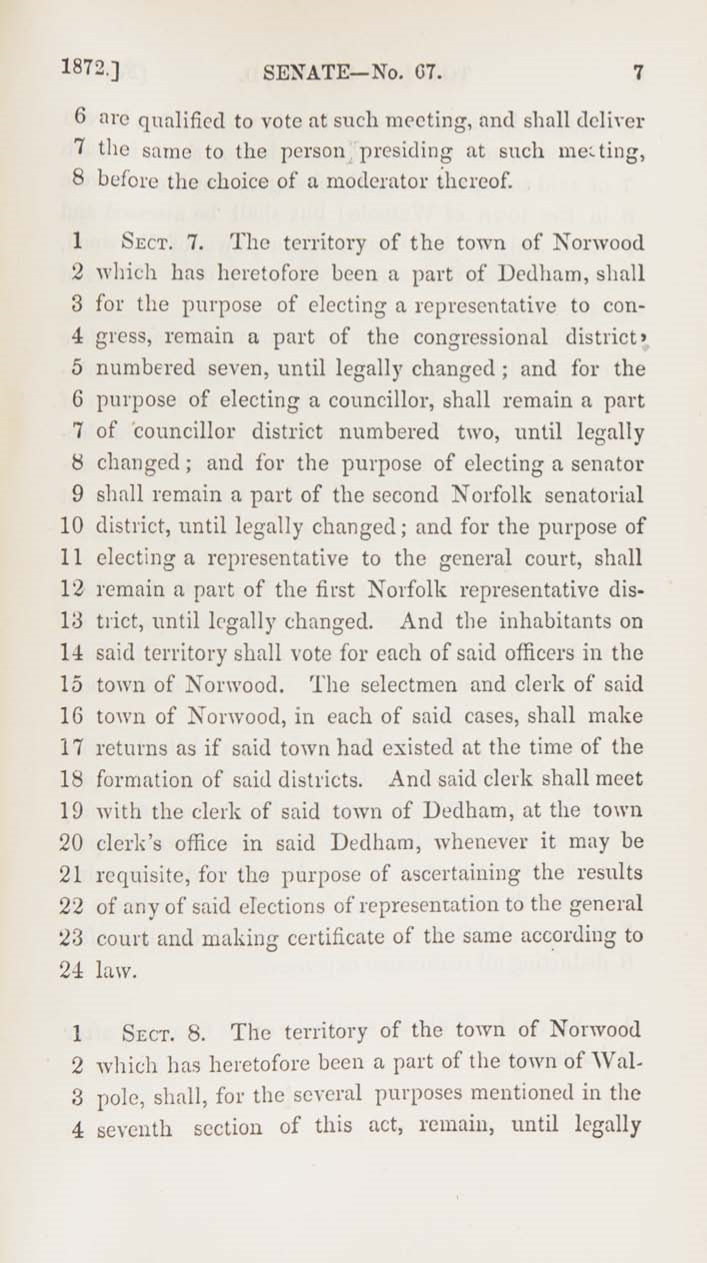